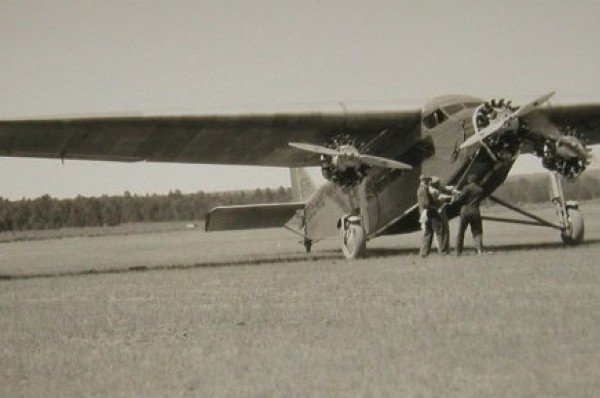 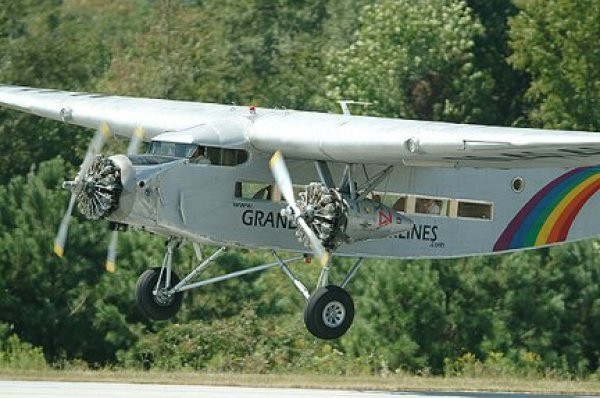 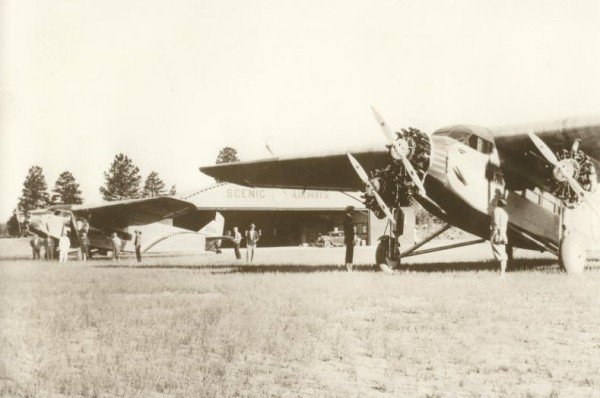 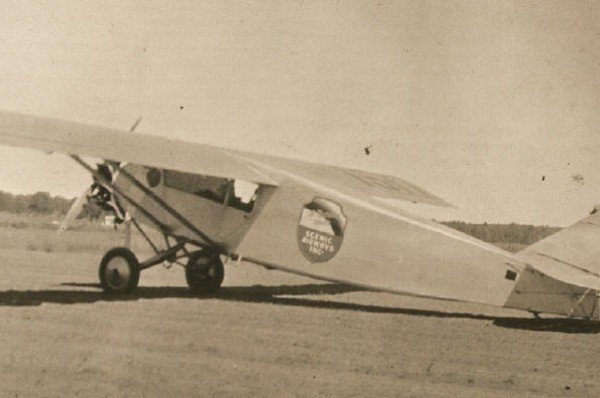 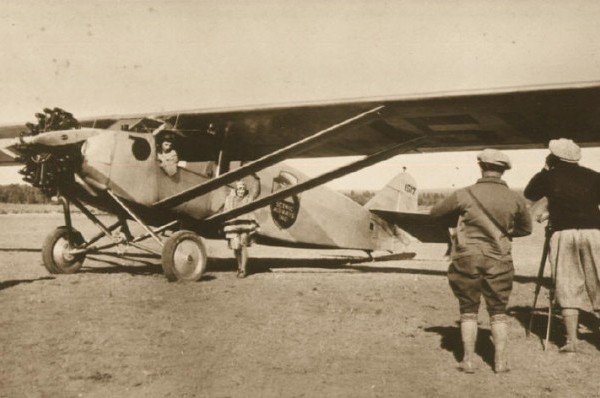 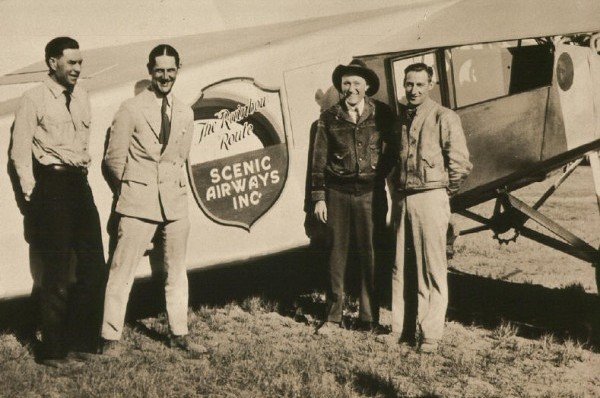 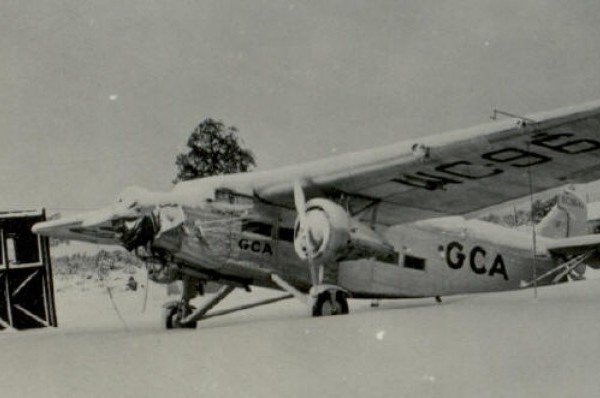 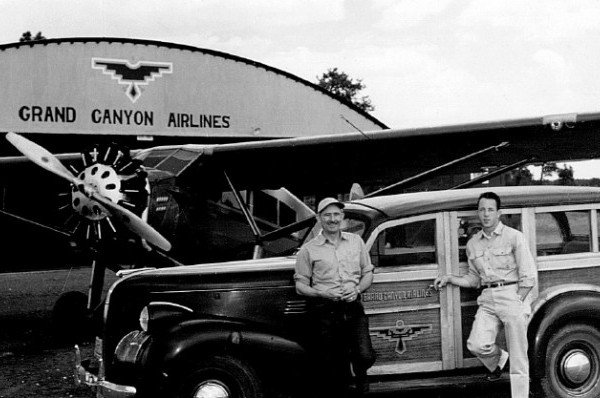 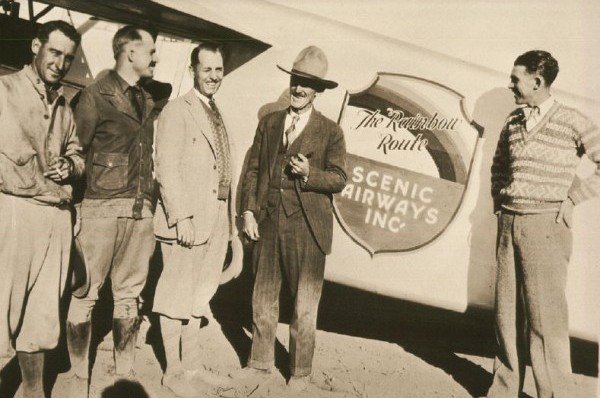 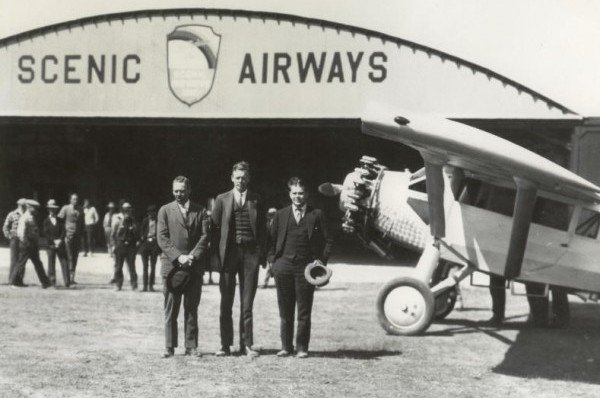 Now you've found the ticket! (This one was used in 1934). Just 23 years after two young men from Ohio broke the surly bands of earth's gravity with a heavier than air, powered and controlled aircraft, another visionary named J. Parker Van Zandt had the desire to further promote aviation and found what he thought was the perfect spot on earth to do that - THE GRAND CANYON. Organized in 1927 under the name Scenic Airways, Van Zandt set out to create a niche in aviation dedicated solely to promote man's ability to fly with sightseeing. The first commercial air tour of Grand Canyon was on October 3, 1927 (photo #2, #3, #4). Pioneering in more areas, Scenic Airways is credited with providing the first commercial air tours and charters over Rainbow Natural Bridge, Monument Valley, and much more. Van Zandt thought the West was so beautiful, he named the flights "The Rainbow Route" (as depicted on the aircraft at that time).

The company thrived by expanding south looking for winter business where Van Zandt bought five cotton farms just outside of Phoenix, built an airport and named it "Sky Harbor". The first flight from Sky Harbor was aboard our Ford Tri-Motor on November 18, 1928 (photo #10). Shortly thereafter Van Zandt started a flight training school (photo #11, #12) taking a fishing club to Rocky Point, Mexico. The following year had more growth but hard times fell on the airline in October 1929 when the stock market crashed and the Great Depression set in, causing Van Zandt to sell the company and assets to some local Arizona pilots. The company then changed its name to Grand Canyon Air Lines (two words) and the Thunderbird was introduced as the logo in 1930. A short while later the name was simplified and changed it to Grand Canyon Airlines. Service continued with expansion to Boulder City, NV where air tours were provided over the newly constructed Boulder Dam (now known as Hoover Dam) and Grand Canyon. That service was discontinued in the late 1930's but has started again in 2005.

Today, 78 years later, GCA has provided millions of visitors from all over the world with memories and experiences of a lifetime and GCA continues to share the Grand Canyon, Rainbow Bridge, Monument Valley, and more! There is so much more to share so stay tuned to this page, but in the meantime please enjoy just a small piece of our history through these incredible photographs. If you have any information on Scenic Airways or Grand Canyon Airlines history that you would like to share, please contact John Dillon by e-mail by clicking here . Read more about the Ford Tri-Motor by clicking here

(NOTE: All photos are property and copyrighted by Grand Canyon Airlines and may not be used without written permission).